The genetic material in all human beings is stored in the form of DNA (Deoxyribonucleic acid). Almost all of the genetic material is tightly packed together into 23 pairs of chromosomes, 22 pairs of autosomes and one pair of sex chromosomes, namely XX in females and XY in males. During reproduction, the progeny receives 22 autosomes from both its parents, an X chromosome from the mother and an X or Y chromosome from the father which determines the sex of the progeny.

The two chromosomes that make up each pair are very similar to each other, carrying similar codes at similar locations (similar but not identical). The differences between the chromosomes are about 0.1%, usually which is the average genetic difference between any two individuals. These differences mainly arise because of mutations, i.e. random errors during cell division. These mutations are then passed on to the next generation, assuming that they are not lethal and hence not eliminated through natural selection.

During gamete formation, these chromosomes undergo a process called genetic recombination in which each parent randomly reshuffles the chromosomes that they inherited from their parents before passing them on to their offsprings. This way, the traits received by the offspring are different from both its parents. However, there is an exception, the Y chromosome that a male receives from his father is passed on to the offspring without any recombination. So the Y chromosome, which is passed on from generation to generation in all the males is the same apart from the random mutations.

Because of this nature of mtDNA and Y chromosome that they are inherited from exclusively maternal and paternal lines of a person respectively, it has become of great help to population geneticists studying the inheritance of different populations. So if a person is found with exactly the same mtDNA or the Y chromosome as that of another person, we can relate them as the ancestors or the descendants of one another. However, we cannot distinguish the former from the latter because of the same genetic code. What helps us in doing this is the accumulation of mutations in the mtDNA and the Y chromosomes through generations.2

Say if a female ancestor had a particular mutation in its mtDNA then all her progeny will have the same mutation in them and any mutation which occurs after that will just distinguish the ancestor from the descendent. The same will be the case with the Y chromosomes of the males only this time it will tell us only the male descendant’s patriarchal lineage, unlike the mtDNA which can tell us the matriarchal lineage of both males and females. The mutation rates of some of these genes have been worked out with large confidence boundaries which can help us create an approximate genetic family tree and predict the time that has passed since the two branches or sub-branches divided. Population geneticists call these branches as haplogroups or sub-haplogroups.3

The following figure broadly shows the haplogroup and sub-haplogroups developed from mtDNA analysis.4 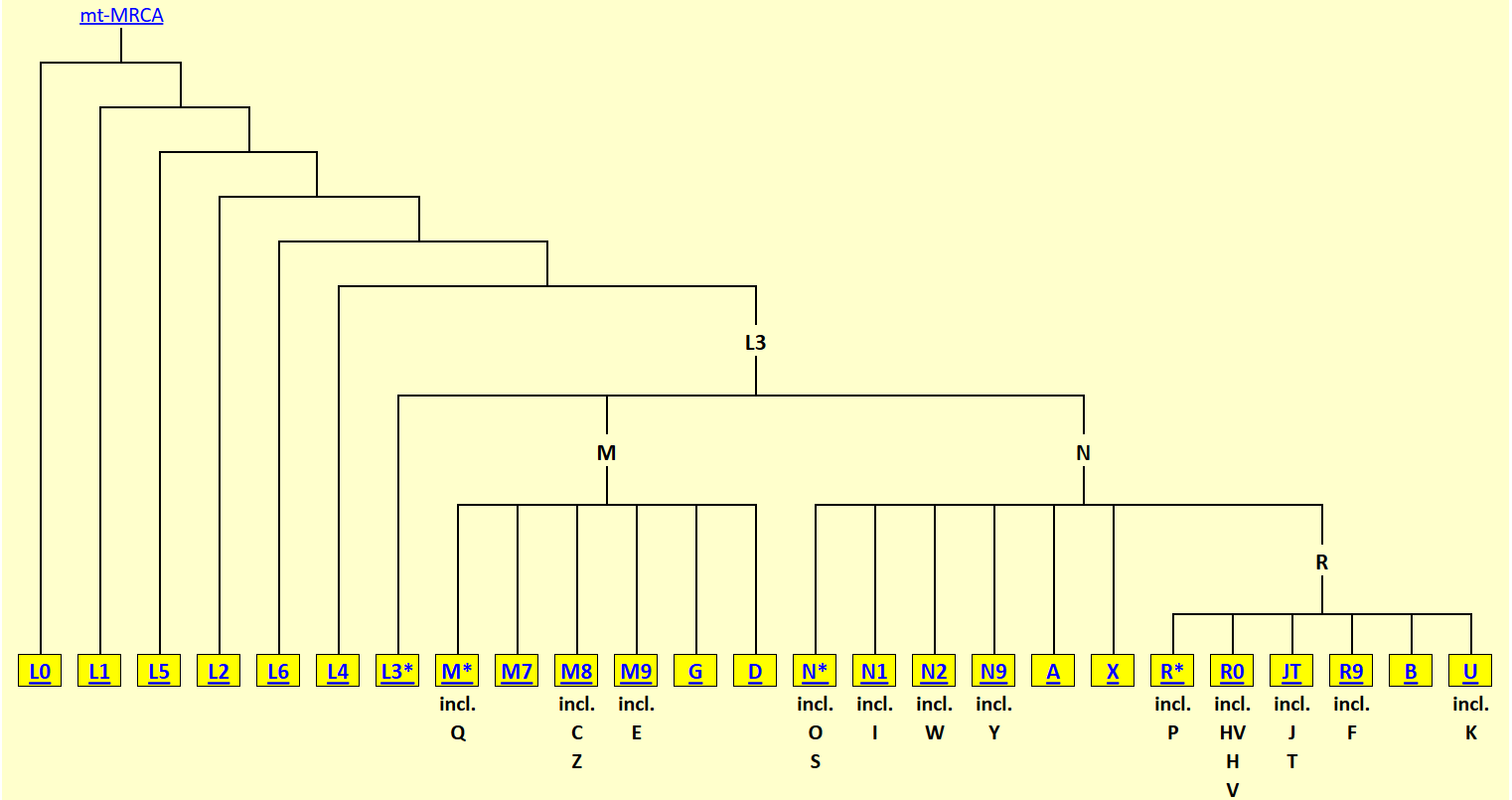 These haplogroup and sub-haplogroups developed from mtDNA and Y chromosome analysis have helped prove that all the existing human populations come from a single African population, namely the L3 mtDNA haplogroup which migrated out of Africa around 70,000 years ago.

These mtDNA and Y chromosome analysis techniques, along with other archaeological methods, has helped settle many debates in evolutionary biology, anthropology, history, and many more areas. It can have many further implications that can help us answer many unanswered questions regarding the vast diversity of populations present today!